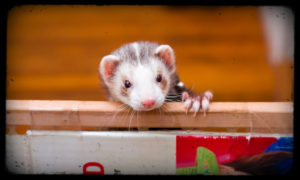 Can I help you cook? by Originalpozer (CC BY-NC-SA)

If you already have a pet ferret, or you are considering getting one, you may want to know as much about these fascinating animals as possible. This article offers you some fun and interesting ferret facts.

Although ferrets are relatively uncommon as pets and are considered to be “exotic”, in fact they have been domesticated for around 2000 years. Hunters would keep ferrets in cages or pouches as they traveled around to assist them in catching rabbits. When the hunter found a rabbit hole, he would let the ferret go inside and then wait for the rabbit to emerge so that he could shoot it. This practice is still carried out today, but now it is a sport rather than for food purposes.

Ferrets are now becoming popular as pets because they are very clever, sociable and easy to train. Like a cat, a ferret can learn to use a litter tray or litter box, and they are fun to watch and interact with.

It is a fascinating fact that ferrets have been used for various working purposes other than hunting vermin. One of their uses is to run wires, and high profile organizations such as Boeing and even the British Royal Family have required their services from time to time.

It is a fact that ferrets love to sleep and spend the majority of their day napping. When the sun goes down, they wake up and start to become active.

A ferret can live for anything between 5 and 10 years if allowed to live out its natural lifespan. They have a longer lifespan compare to rabbits.

Like skunks, ferrets are able to release an unpleasant odor if disturbed or panicked. Luckily, this smell is not as strong as that of a skunk.