The black-footed ferret is an intriguing creature for exotic animal lovers. This is the only ferret native to North America. It just happens to be illegal to own this animal as a pet because it is an endangered species. This creature is also called an American polecat. So, if you see anyone walking down the street with a black-footed ferret he is likely breaking the laws of the United States.

Why is it Illegal to Own a Black-Footed Ferrets as a Pet? 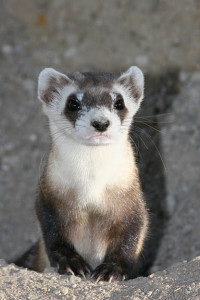 The adorable looking black-footed ferret has been on the Endangered Species list of the United States since 1973. Moreover, there are some distinct differences between the black-footed ferret and its domestic relatives that illustrate why it is not an animal that a person should consider having as a pet even if it were legal which it is not!

A black-footed ferret is a wild animal which means that unlike a domestic ferret, its natural instinct is to hunt, kill and eat smaller animals. Another important difference between a domestic ferret and a black-footed variation is the daily routine. The domesticated American polecat will generally adapt to their owner’s schedule while a black-footed ferret is most active in late evenings and early dawn to mid-morning which could result in it becoming a ‘holy’ terror in a neighborhood.

A homeowner with a black-footed ferret which is allowed to ‘roam’ in the backyard during its active hours could expand its search for food to the properties of other people in the neighbourhood with surprising consequences such as small animals suddenly turning up ‘missing’.

Moreover, because there are so few black-footed ferrets in the United States as illustrated by it being an endangered species, any individual that owns one is preventing it from creating offspring and increasing the population.

The black-footed ferret is an attractive, intriguing animal that a person should not own if they want to stay on the ‘good’ side of the U.S. government and the people in their community. 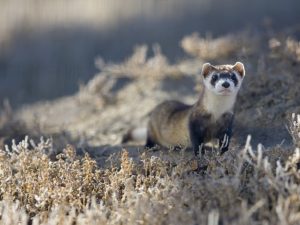